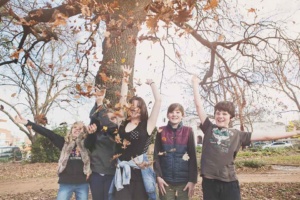 On Friday the 29th of June a group of 23 young people from Northern suburbs of Melbourne headed off after a McDonalds breakfast in a bus to make the 1.5 hour journey to the Victorian Blue Light Youth Camp in Maldon along with 4 police members and a support crew. of volunteers.
The aim of this weekend was to provide support and help to young people to learn skills that will help them increase their capacity to succeed. The program has also been designed to empower young people and provide them with strategies to enhance their social connectedness, improve their self-esteem, confidence and sense of belonging in their community. Additionally a Cultural component has been added to this camp to connect the young people back to their heritage.
After a stop off in Castlemaine for lunch and some get to know you games we arrived at the camp. The kids were extremely excited about the new surroundings and quickly set about getting their belongings into their room allocations so the fun could begin.
The group set off on a bike ride through Maldon to the BMX track where everyone enjoyed Harcourts apples and a burn around the dirt track for those that were confident enough. Of course the boys tried to impress everyone with their tricks whilst the girls putted around. We even had the tandem bike for those who were not confident riders.
We headed back to camp to play some games that would help everyone to remember each others names. The first of these involved coming up with a nickname that started with the same letter as your own name, we had Just Joey, Tim Tam, Koala Karen and Mad Maddie amongst others.
After a magnificent dinner of spaghetti bolognaise, garlic bread and chocolate mousse everyone headed up to play night mini golf or do quieter games like colouring. This was a great opportunity for everyone to chat and get to know each other.
Once darkness descended everyone ventured out on a night walk. With torches in hand the group snaked its way around Maldon searching for koalas in trees or anything else they could spot. Unfortunately with the noise that 23 children make walking around in the dark was sure to make any animal run and hide.
The walk was followed by more games before heading off to bed ready for a big weekend adventure beginning with Rock Climbing and Bubble Soccer in the morning. 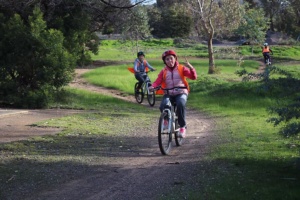 Starting off with a big breakfast of pancakes put everyone in a great mood and ready for a huge day of fun and activities.
All of the kids could hardly contain their excitement at what we were all going to do today and kept asking “Whats next? Whats next?”
First up was the much anticipated Bubble Soccer. If you have ever done this you will have an appreciation of just how tiring this is. It was fantastic to watch everyone having a great time and lots of laughs as they rolled around the field trying to kick the ball into the goals.
In the end it becomes not so much about kicking the ball and more about knocking each other over!

This was another activity that the camp participants were very excited about giving a try. There was a mixture of emotions from overloaded excitement, fear, hesitation and feelings of unease. Some took on this challenge with gusto and scaled the wall in record times, even organising races up the wall in the end to see who could touch the top first.
Although most took on this exercise with a positive attitude there were a few who, doing this would be a very big challenge.
Fear of heights, lack of trust and fear of failure and having people make fun of you are some of the barriers to taking on a task like this. Luckily with this group we were able to conquer all of these with a mixture of encouragement, discussion and lots of cheering! Everyone had a go and climbed the wall and we were all very proud! 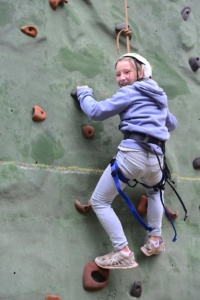 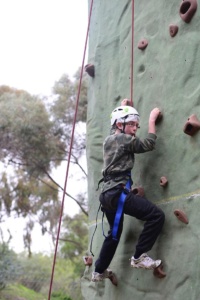 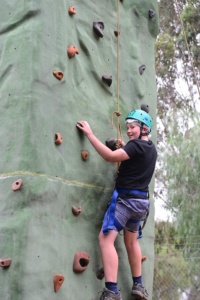 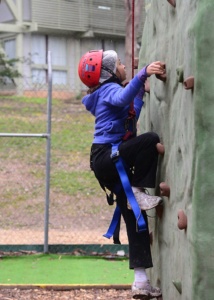 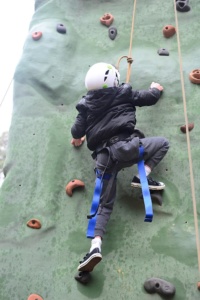 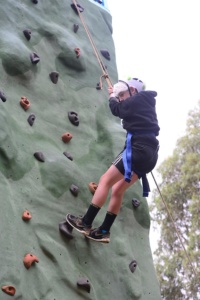 NOT ALL FUN & GAMES….well it was really

Day two of the BLAST Camp involved a good mix of different types of activities, all of which were not only a lot of fun but had a purpose that closely aligned with the objectives of the BLAST Camp program.
The group split into 2 for our next sessions. One group had a discussion about the police and their role in the community. With the kids feeling very comfortable with the police members at the camp it enabled them to ask any questions that they had about policing and crime, keeping in mind that many of these childrens only experience with police has been negative.
The questions ranged from how do you become a police officer to have you ever had to use your gun and everything in between. It was a fantastic opportunity for the police to talk about how they do their job and why sometimes people need to be arrested.
After the questions everyone got to have a go at wearing the police kit and handcuffs! 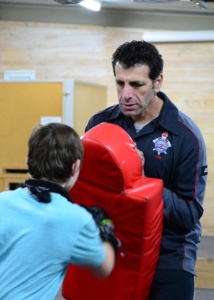 Sal and Owen (Butler) are both community liaison officers for the MFB and work with many different people. Sal and Owen gave the kids a few tips and pointers on boxing. 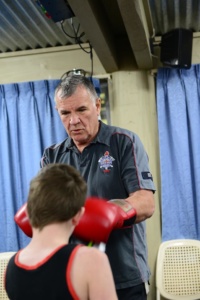 We talked to the kids about their rights in relation to self-defence, what they are allowed to do and what they’re not allowed to do. The participants had a very tiring and fun time learning some basic boxing techniques. As a result of this session, two of the boys have since been linked in with a boxing gym.
One of the most surprising things about this session was how good the girls were. It was great to see how focused and strong they were.

The afternoon of Day 2 started off with a good game of Nerf Wars. This game involves setting up the conference room into 2 sides divided by barrells. Each team is fully equipped with safety goggles, nerf guns and foam bullets. Once the lights go out and the music starts it’s time to shoot up a storm. With both adults and kids playing this game it was a lot of fun.
More bike riding around the camp bike trails was followed by another fantastic dinner of chicken schnitzel and vegies, followed by a jelly desert.
After dinner everyone put on their PJ’s in readiness for some more games and a movie night.
Games included Noodle Hockey and a talent quest. What amazing talent we had amongst the group! It was fantastic to see the confidence people had to get up and have a go in front of everyone. From singing, dancing, rapping and comedy we had it all.
The movie chosen was Firehouse Dog. Amazingly everyone settled in and watching the movie and enjoying popcorn and hot chocolate. There were some who never saw the end of the movie….falling asleep instead!

The objective of this task was to come up with a design that would protect a raw egg from breaking when dropped from a great height.
Everyone thought this was an impossible task but were keen to give it a try.
Breaking into four groups each group was given the same supplies of an egg, straws, masking tape, paper and textas.
It was up to them to create a design that would beat all of the others when it came to dropping them off the balcony.
Each group used their problem solving skills and team work to come up with some amazing ideas. Some of which worked brilliantly, others which didn’t work as well in practice as was hoped.
After numerous drops and second and third drops the victors were team Tim Tam!
Before heading home we had some presentations to our volunteers and a sausage sizzle lunch. 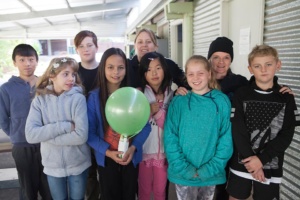 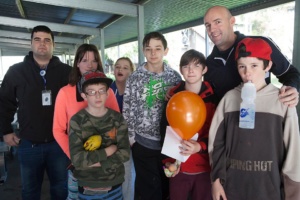 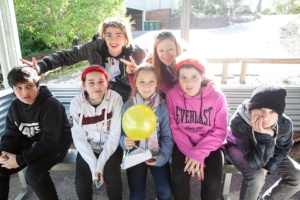 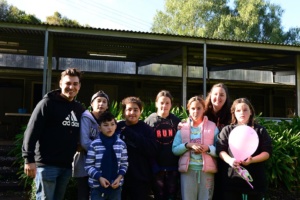 THE END…but also just the beginning

Our time at BLAST Camp sadly had to come to an end. There was not one person on this camp who didn’t benefit in some way. Getting to know these young people and learning about the struggles that they are going through has given staff a better understanding. The BLAST Camp program was a very successful collaboration between organisations and people that are determined to make a difference.

We thank McDonalds Northern United for providing the funding to make this possible. We would also like to thank the organisations involved including Blue Light Victoria, Victoria Police, Victorian Blue Light Youth Camps and the MFB Community Liaison Office.

This would also not have been possible without the generous people that attended the camp and gave their time. Thank you to Police Members Tim Forster, Jo Parissis, Leah Kersing and Matt David. Also thank you to Domenic Castagna, Luke Bryan, Katherine O’Donnell and Karen Burns.

You were all fantastic and made everyone very proud! We look forward to an ongoing journey.